Your own gold standard: what are the advantages?

In 1971, the President of the United States Richard Nixon completely eradicated the gold standard system from the global economy.

How correct was that decision, and what conclusions can be drawn almost half a century later?

The age of gold

The gold standard* system arose in the 19th century, when the industrial revolution in Europe led to the expansion of international trade. A universal payment tool was required for the convenience of mutual settlements. Gold came to the rescue, becoming a measure of national currencies’ monetary value, the exchange rate of which depended on the volume of gold reserves of countries.

The introduction of the gold standard almost entirely eliminated inflation, contributing to the rapid development of trade relations and the stabilization of exchange rates.

The abandonment of the gold standard

Over time, the gold standard had changed formats, adapting to the economic realities and the changing geopolitical environment. The history of the gold standard as we know it ended on August 15, 1971, when the US government abolished the gold-based dollar law. The amount of precious metal in the country was insufficient to satisfy the growing global demand for the dollar — the main reserve currency*.

Alongside the abandonment of the gold standard, the restraining factor that prevented the printing of banknotes in unlimited quantities was no longer an issue. The world got flooded with money, the supply of which was backed only by trust in the countries that were the direct issuers of said currency. 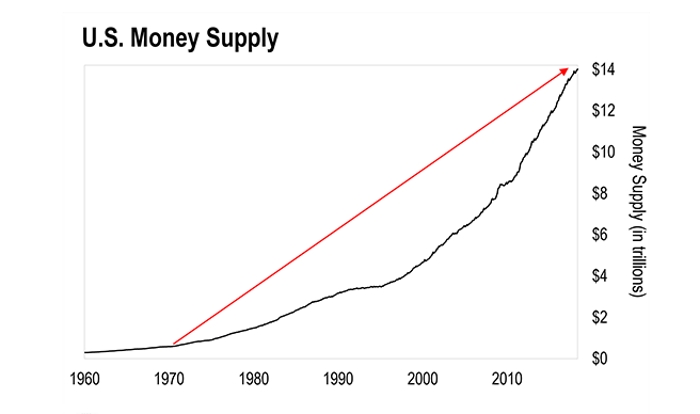 In the chart: the money supply in the United States grew steadily until 1971. After the abandonment of the gold standard, it began to increase at a rapid pace.

Without a solid unified foundation like the gold standard, the global economy has lost stability and become difficult to manage. Imagine a ship with 197 captains aboard — one from each country. Everyone wants to sail in their own direction, and everyone is trying to turn the wheel in opposing directions. As a result, the ship makes erratic maneuvers and cannot stay the course. This is quite similar to what is happening with the modern economy, which has lost a constant reference point.

The uncontrolled issue of money not backed by a real asset has provoked ever-rising inflation. The extent of depreciation can be seen by tracing how the price of the dollar has changed against gold:

In the chart: rising gold prices amid declining purchasing power of the US dollar.

It is hardly surprising that, given these circumstances, crises follow one after another, and the public debt of some countries has reached alarming proportions.

Your own gold standard

In conditions of economic instability, anyone can strengthen their Financial Security with the help of gold.

back up your finances with a stock of precious metal.

Unlike the currency, gold is inflation-proof, moreover, during a crisis, the price of the yellow metal usually increases. Therefore, it makes sense to store part of the savings in gold — such a commodity will protect the invested capital from depreciation, minimizing the effect of losses caused to currency assets.

Gold not only preserves the invested funds, but also constitutes a means of accumulation. Over the past decades, the yellow metal has been demonstrating an upward trend. Having bought gold 20 years ago, you would have increased your capital almost fivefold by now.

No currency guarantees long-term safety of savings. Gold is an eternal value that can withstand any economic threat, ensuring Financial Security for your family and yourself.

*The gold standard — a monetary system in which each economic unit of account (national currency) is based on a fixed quantity of gold. For example, the US twenty-dollar bill ($20) was equivalent to one ounce of gold (31,1 grams) in 1928.

*A reserve currency (aka anchor currency) — a universal currency held by central banks as part of their foreign exchange reserves.