Japan: how to get out of the “economic trap”?

We often write about the ways how central banks of different countries strenuously stock up on gold. They do this not to show off their wealth to the world. At critical times, the accumulated gold is used for stabilizing the country’s economy and coping with financial turmoil.

A way out of a difficult situation

Japan has recently demonstrated an example of such actions. The country’s authorities have sold 80 tons of the yellow metal from the national reserves, and they plan to use the proceeds to counter the crisis caused by the COVID-19 pandemic.

Today, Japan’s public debt is twice the size of the country’s economy. Tax revenue has dropped significantly due to the coronavirus crisis. In these conditions, the government needed to find a source of financing for implementation of anti-crisis measures, a source that was not related to taxes. A proven remedy came to the rescue — gold.

The sale of the noble metal has generated $4.84 billion for the government. These funds will be directed at stimulating research and development at universities. 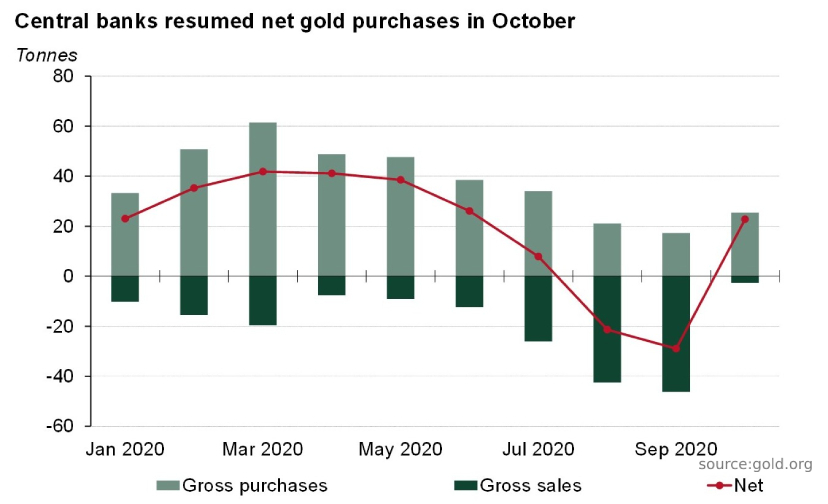 In the chart: Japan is not the only country that solves economic problems in this way, replenishing the treasury with money. The World Gold Council* report says that in August and September 2020, for the first time in ten years, central banks were selling more precious metal than they were buying. Uzbekistan and Turkey became the leaders in terms of sales. However, the situation changed in October, and countries began buying rather than selling gold once again.

The above data indicate that gold remains the most important international financial tool. It is used in various parts of the world as “heavy artillery” against the crisis. Gold reserves make a nation more resilient in an unstable environment, providing more options for protection against economic disasters and counteraction of its consequences.

Trust in the yellow metal is further reinforced by the fact that this asset is of eternal value. Gold can be kept in depositories for decades, until the right moment when it can be used. In the meantime, it will not depreciate, and, most likely, will even rise in price several-fold.

The benefits of the yellow metal are not limited to central banks. Natural persons can also strengthen their Financial Security with gold in the same way. For this purpose, the GIG-OS Fixing project has been created on our online platform.

Since the price of gold tends to rise, the project provides for the possibility of fixing the cost of 100-gram investment bars. Thus you do not just pay later, you pay in parts, and you yourself choose the amount of your next contribution! There is virtually no additional pressure on your budget, and you get unprecedented freedom and flexibility of payments.

The fixing minimizes the risk of possible cost growth of the ordered bars due to fluctuations in the gold market, so you won’t ever overpay.

Ensure reliable financial protection for yourself and your family!

*The World Gold Council — the market development organization, founded by the world's leading gold producers to stimulate demand for gold.