India: there is never too much gold!

We have recently written that the National Bank of Poland had expressed its intention to significantly increase the country’s gold reserve. It’s time to familiarize with the news from another part of the world — Asia — where the noble metal also found itself in the spotlight.

A product that is in demand by everyone

The World Gold Council* reports that in February 2021, gold import in India reached its highest figures since May 2019. The sharp rise was caused by the high retail demand for the valuable metal. In particular, there was an increase in demand for bars weighing 50 and 100 grams. Not only in India, but all over the world, one hundred gram bars are especially popular with financial institutions and ordinary people. 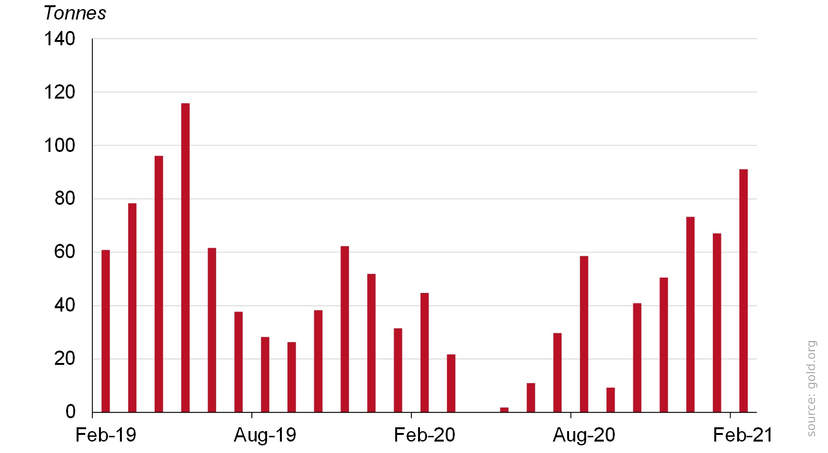 In the chart: dynamics of gold import in India over the past two years.

The asset of national importance

Not just commercial organizations and individuals have replenished their gold reserves. The Reserve Bank of India also acquired 11.2 tons of the precious metal, making the largest monthly purchase ever recorded.

The country now has 687.8 tons of gold at its disposal, thus the share of the yellow metal in Indian government reserves accounts for 6.6%. In recent years, India has increased its purchases of gold in order to significantly strengthen its financial position. 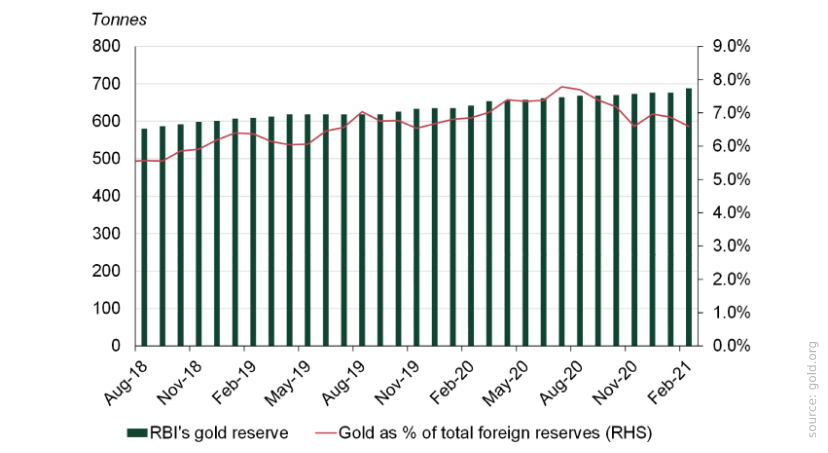 In the chart: India’s gold reserves (the volume in tons is marked with columns) are consistently increasing from year to year.

Michael Gentile, strategic investor, director of exploration company Solstice Gold, believes that gold has a bright future in the long term. In his opinion, the governments of many countries have accumulated huge debts, which will inevitably lead to inflation combined with low interest rates. These factors should have the most positive effect on the price of gold in the coming years.

The high demand for gold is closely associated with the unstable economic environment in the world. Uncertainty about the future and fear of losing savings are pushing people to purchase investment bars. Today, many people want to buy gold, but not everyone understands how to do it the right way, without putting excessive financial effort into it.

The specialists of our online platform have developed the GIG-OS Fixing project, which makes the purchase of gold bars as simple, convenient and profitable as possible.

Firstly, fixing the cost of the bar allows you not to worry that the order amount may change due to price fluctuations in the gold market.

Secondly, you can pay for 100-gram bars in parts, choosing not only the schedule of regular contributions but also the amount of each payment independently.

Create your gold reserve with the GIG-OS online platform!

*The World Gold Council — the market development organization, founded by the world’s leading gold producers to stimulate demand for gold.