In this article, we are going to look at what has happened to the gold market over the past three decades and what changes await it in the future.

Leaders of the industry

Historically, South Africa, the United States of America, Australia and Canada were considered the captains of the gold industry. In 1995, the combined indicators of these countries accounted for 56% of world gold production. Since then, however, the sector’s geography has expanded markedly, and by 2021, the contribution of these four countries has dropped to 24%.

Today, two world powers are considered leaders in the mining of the precious metals. For 14 years now, China has held the title of the world’s leading gold miner. In 2019, Russia became the second largest gold prospecting country in the world, surpassing South Africa and Australia. As a result, in the past 2020, Russia mined 341 tons of the valuable metal, second only to China with 364 tons mined, the country that firmly maintains a leading position in the industry. 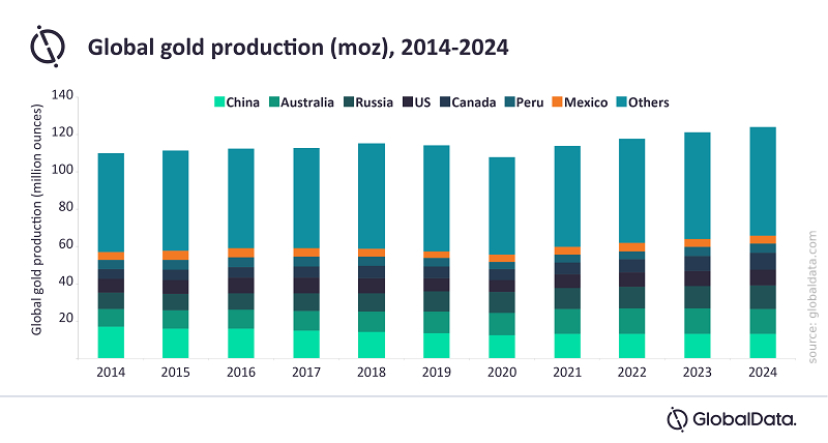 In the chart: statistics of global gold production (2014-2021) and market development forecast until 2024.

Over the past 30 years, the production of the valuable metal has increased significantly. If 2,299 tons were mined in 1995, then by 2018 the world indicators increased by 55%, setting an absolute record of 3,556 tons.

The development of the gold mining sector has become an important factor in the price growth of the yellow metal. Three decades ago, an ounce of gold was estimated at about $380, and in the first quarter of 2021, the price has surely fixed itself above $1,700.

In the chart: dynamics of growth in the price of an ounce of gold over the past 30 years.

Renowned analyst, director of asset management company Sprott, Rick Rule, is sure that a noticeable reduction in investment in the field of gold exploration will lead to a shortage of the industrial raw material.

It is becoming increasingly more difficult and costly to extract the yellow metal as few companies can afford modern expensive equipment. Natural reserves of the precious metal are being depleted. Gold is becoming more difficult to mine, which means that in the future the prices for this asset will rise.

Most market analysts are of the opinion that the price of gold will continue to rise in 2021. The economic instability and a likely decrease in the volume of relatively easy-to-mine metal will serve as the growth factors.

Mark Matthews, expert of the banking corporation Julius Baer Group, is confident that now is the most favorable moment to buy investment gold.

Specialists of the analytical company CPM Group forecast that by the end of the year the price of an ounce of the precious metal will grow by an average of 6%, and in the next five years, the gold market will face new price records.

Due to the instability of the global economy, ubiquitous demand for gold continues to increase. More and more people are turning to the stable asset that can reliably protect their savings from inflation and the consequences of the crisis. At the same time, its ore reserves are steadily decreasing, and their depletion ceases to seem a distant and semi-surreal prospect.

Use the opportunity to purchase the precious metal on especially convenient, profitable and safe conditions with the help of the GIG-OS Time Shift special project. Preserve and accumulate your savings using the time-tested asset — gold.