There are several strategies for the precious metal trading, and the most popular of them are the concepts of “bulls” and “bears”. The terminology seems logical: when attacking, the bear strikes from top to bottom. The bull, on the other hand, puts out its horns and hits the opponent from the bottom up. The same happens on the stock exchange: the “bulls” believe that the price of gold will rise and, accordingly, buy gold. The “bears”, on the contrary, predict a decline in the rate of the yellow metal and therefore sell it.

The history of terms dates back to the oldest stock exchange — the English one. The merchants met in taverns and discussed their participation in the deals. According to historians, the cunning English traders were looking for an opportunity to profit at someone else’s expense. In the hope of a fall in the rate, they sold gold, which, in fact, they did not have. That is, they started selling the bear’s skin before catching the bear, and for this they were nicknamed “bears”.

In the photo: confrontation between the bull and the bear.

The concept of “bull” was introduced into everyday life by the satirist John Arbuthnot. He invented the hero John Bull: an Englishman, who was portrayed as a humanoid bull-gentleman. According to the plot of the sarcastic essay, John Bull was the constant victim of bear attacks and jokes, and once there was a conflict between them. The famous character was adopted by stockbrokers and soon began to be actively used around the world. In 1714, the term “bull”, in the sense of stock market optimist, was included into the Oxford English Dictionary. 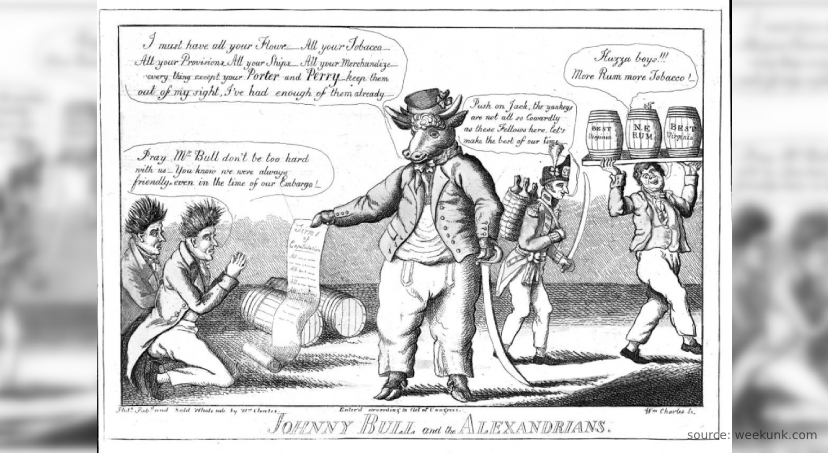 In the photo: John Bull, who is depicted as a bull.

When making forecasts about the gold market and further developments, experts tend to be “bullish”. Analysts of the largest international financial conglomerates Goldman Sachs Group Inc., Citigroup Inc. and Bank of America project an impressive range of gold price growth in 2021, up to $3,000 per ounce. They also note that there are almost no bears left in the progressive markets. “Bears” are focused on quick results, while “bulls” are looking to the future. Modern investors are less likely to choose short-term deals. They monitor market trends and consider the purchase of the yellow metal a long-term investment.

In August 2020, the price of gold reached an all-time high, reaching $2,069 dollars per ounce, and since then the “bulls” have been able to adequately repel attacks of the “bears”.

In the past five months, the price of the precious metal has varied within the range of $2,000. Considering that the price of the yellow metal has risen by $900 over the past two years, this is a very solid figure. Experts have noted that the price of gold repeated the statistical trend of the last ten years in 2020 — the price per ounce of the noble metal rose again in December. Such a trend must give gold a solid start in 2021 — the Year of the Metal Ox (Bull).

The stability of the yellow metal during the crisis has led to an increased interest in the asset from both investors and ordinary people. The “bulls” were right — the price of gold has grown significantly. It becomes obvious that a person who owns physical gold minimizes financial risks and accumulates savings.

Gold is a stable and reliable investment asset.

Purchase 100-gram bars in parts by choosing the size of contributions yourself. Choose a payment schedule that suits you, without the unnecessary burden on the budget. After completing the deal, you receive a bonus — additional 5 or 10 grams of gold. Give the joy of Financial Security to yourself and your loved ones.

Give preference to gold!