Gold and the dollar half a century after the financial revolution

This year marks the 50th anniversary of the end of the gold standard system* in the US. In August 1971, President Richard Nixon abolished the yellow metal backing of the dollar.

As a result, the gold exchange rate ceased to be fixed and from 1974 to 1980 soared by 385%. Over the past half century, the price of the precious metal has grown more than 46 times, showing an average annual growth rate of 8%. 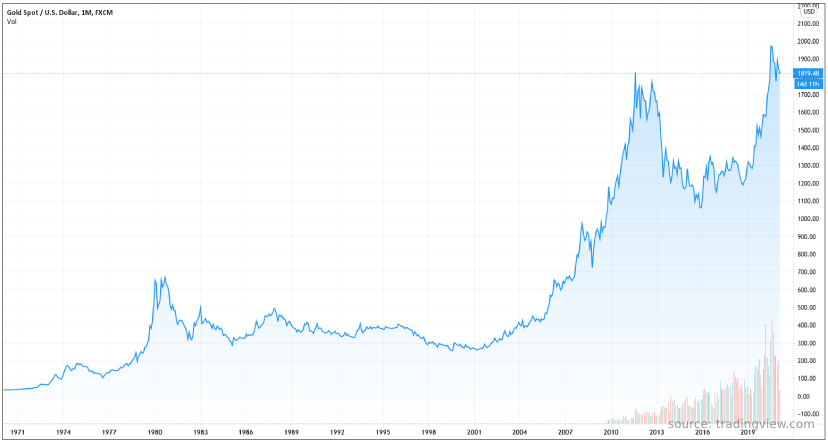 In the chart: over the decades since Nixon’s historic decision, gold cost has shown an upward trend.

According to the World Gold Council*, gold bars have become one of the most liquid assets in the world. The global market buys and sells gold bars at the amount of over $145 billion every day.

The abandonment of the gold standard provoked a significant increase in the money supply in circulation. Until 1971, currency could only be issued in limited quantities. The elimination of the interrelation between the dollar and gold made it possible to print as many unbacked banknotes as  desired.

This has led to the situation when the US national debt at the moment is almost $28 trillion — that is, 130% of the country’s economy.

There are fears that the debt will soon jump even higher as new US President Joe Biden prepares to provide a $1.9 trillion economic aid package to Americans.

Dollar is under threat

The uncontrolled printing of money, which became a habit after 1971, makes every banknote less and less valuable. According to Stephen Roach, a faculty member at Yale University and former chairman of Morgan Stanley Asia, the US currency is on the brink of an abyss and signs of an impending collapse are already being observed.

In the chart: since March 2020, the dollar has become increasingly weaker relative to its competitors.

The expert predicts that by the end of 2021 the dollar may fall in price by 35%. Roach is convinced that the government of the United States has little chance of saving their currency from the deepening crisis.

The situation is completely different for the yellow metal: according to the results of the past year, it once again justified its reputation as one of the most reliable and profitable assets. Given the continued economic uncertainty and associated risks, the World Gold Council believes that the precious metal will continue to perform well.

Despite the fact that the world monetary system has abandoned the gold standard, no one prevents anybody from introducing a personal standard based on the precious metal. You can protect your savings from inflation by backing them up with sufficient amount of gold.

An excellent solution on the way to Financial Security will be the purchase of investment bars using the GIG-OS Fixing special project. Fix the cost of 100-gram bars and pay for them in parts over a long period, independently deciding when to make each contribution and in what amount. This approach virtually eliminates the probability that the sum of your order will change due to a sharp price spike on the gold market. Moreover, the possibility of gradual payment on the terms of your choice will save your budget from unnecessary financial burdens.

MORE ABOUT THE PROJECT

* The gold standard system — a monetary system in which each economic unit of account (national currency) is based on a fixed quantity of gold. For example, the US twenty-dollar bill ($20) was equivalent to one ounce of gold (31.1 grams) in 1928.

* The World Gold Council — the market development organization, founded by the world’s leading gold producers to stimulate demand for gold.