Money periodically lost its value and became cheaper hundreds and thousands of times. It happened in many countries, across different continents. We have compiled the most striking examples of devaluation* of national currencies over the last five decades.

In the 70s, Argentina was hit by the financial crisis. The price level doubled every two to three months. The government decided to save the situation and introduced a new national currency. The old peso was exchanged for a new "legal peso" at the rate of 100:1.

The crisis in the economy was accompanied by all the classic symptoms of the Lack of Financial Security virus: unemployment, a decline of living standards and strikes.

CONCLUSION: the old peso savings of Argentine residents have decreased many times. The economic crisis affected the price of the yellow metal: in 1971, the price of gold increased to $43 per troy ounce.. In the photo: participants of the street rally in Córdoba, Argentina.

1975 year. The military coup in Chile

Since the early 70's, the government of Chile printed a huge amount of paper money - escudo, to plug the gap in the country's budget. Besides that, the government decided to take food prices under control. Strict measures had a negative impact on the economy. There was a shortage of food products. Prices have multiplied. In just 2 years, inflation increased sharply from 22% to 353%. Prices for copper decreased, the devaluation of the dollar impacted the national currency. Strikes and mass demonstrations have become more frequent. In 1973, the military coup happened in Chile. In the photo: In 1975, after 15 years of using the escudo currency, Chile issued a new currency – peso.

As a result of the anti-crisis measures of the military government, inflation began to decline.

CONCLUSION: At a time when the national currency of Chile depreciated, gold became more expensive. In 1975, the price of gold was $139 per troy ounce.

1979-1980. The collapse of the national currency in Israel and Vietnam

Inflation in Vietnam began to increase since 1975. Money began to depreciate. The Government of the Socialist Republic banned the free sale of gold, therefore, the "black market" of gold was on the rise in the country.

The state of the united Vietnam abolished the monetary unit of dong. The replacement of the old dong with the new one was made at a rate of 500:1. The exchange limit of 100000 was set for each family. By the end of the 1970s, inflation in the country had reached three-figure numbers. Israel also experienced difficult times. The authorities tried to improve the situation and restore trust in the national currency. In a short time, three heads of state were replaced. In 1979, for the first time in the history of the country, inflation exceeded 110%.

In 1980, instead of a depreciating lira, a new monetary unit was introduced — shekel.

CONCLUSION: due to the difficult economic situation in the world, the demand for gold sharply increased. In 1980, the price of the yellow metal reached $706 per troy ounce. The average price per year was $594.

Starting from 1993, Russia was continuously hit by inflation, which was followed by a default* in 1998. Over five years, the price of some products and services increased by 100% or even more. The prices were in millions of rubles. Banks stopped giving cash to depositors. The market was empty. The workers received their salary in the form of produced goods. In the photo: the queue of the Russian depositors near the bank, August 1998.

CONCLUSION: many people who had money on their bank accounts lost their savings. Against the backdrop of instability in the world, the price of the yellow metal has increased. In 1997-1998, the average price of gold per troy ounce increased to $291. 2001. Devaluation in Belarus, Ecuador and Turkey

Inflation in Belarus has progressed from the mid-nineties to the early 2000s. The Belarusian ruble has fallen in price so much that the government had to introduce a new national currency. Old Belarusian rubles were replaced by new ones at the rate of 2000: 1.

In 1998, following the decrease of oil prices, Ecuador was hit by the financial crisis. The government of the country declared a default on external debts. The Ecuadorian sucre depreciated 4 times. 70% of the population were below the poverty line. This caused a storm of protests and unrest.

The government tried to fix the situation and pegged the sucre to the US dollar at a rate of 25,000: 1. But such measures did not help. Since 2000, the state has finally transferred the country's financial system to the US currency. Since 2001, Ecuador has no national currency. In the photo: The purchase of US dollars from an "illegal dealer" in Quito, Ecuador.

In the photo: The denomination of 20 million Turkish lira was exchanged for 20 new liras.

CONCLUSION: the above-mentioned examples illustrate the depreciation of banknotes. Against the backdrop of inflation, gold rises in price. In 2001, the price of the yellow metal was $276 per troy ounce, in 2005 — $513.

During the mid-2000’s, the financial crisis in this South African country reached alarming proportions. This happened as a result of the state land property redistribution. Prices doubled every half hour.

The Zimbabwean dollar was cheaper than the paper on which it was printed. In 2009, the authorities ceased to issue their own currency and began to use the monetary units of neighbouring countries. In the photo: A citizen of Zimbabwe exchanges a trolley full of banknotes for 1 US dollar.

CONCLUSION: inflation in Zimbabwe has deprived the population of savings kept in the national currency. Gold prices continued to grow. In 2008, the annual average price of a troy ounce was $869, while in 2009, the precious metal was worth $1,087 per ounce.

2019. Gold thrives in comparison to other currencies

According to Forbes business magazine, last year has been one of the most volatile for the global economy over the past 10 years due to trade standoff between the US and China, the anxious expectation of Brexit* and many other factors.

Such circumstances have negatively affected the state of the monetary units of various countries. Iranian rial, Venezuelan bolivar, Vietnamese dong, Indonesian rupee were among the weakest currencies of 2019. 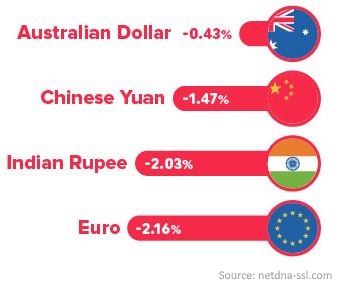 In the chart: 2019 was unsuccessful for a number of major and influential currencies.

At the same time, the price of gold went up, reaching record levels in several national currencies. Among them: British pound, Indian rupee, Japanese yen, Canadian and Australian dollars.

Below are the currencies in which the gold rate showed the most significant growth in 2019:

The average annual price of the yellow metal in US dollars was $1,393 per ounce.

The year has just begun, and gold has already made a breakthrough, demonstrating a price increase of 4% starting from January 1.

In the chart: an upward trend in the price of gold over the past 50 years.

According to analysts of leading world banks such as Goldman Sachs, ABN AMRO and TD Securities, the yellow metal will not lose stability this year and will continue to strengthen its positions. Based on forecasts, the next successful move of gold is expected to occur when its price reaches $1,600 per ounce.

The history of recent decades proves the superiority of the precious metal over unsecured money. Each new crisis robbed people of their currency savings. Gold, on the contrary, remained unharmed and even increased in price. That is why it serves as the best tool of Financial Security and a means of savings protection.

It is difficult to predict the next crisis, but you can be prepared for it.

Personal gold reserve is your shield against economic threats.

*Devaluation — the depreciation of the national currency with respect to a foreign reference currency or currency basket.

*Default — inability to fulfill debt obligations. A default can be experienced by individual enterprises and entire states.

*Brexit — the withdrawal of the United Kingdom from the European Union.