The valuable metal continues to strengthen its positions. Meanwhile, analysts highlight factors that can raise the price of the yellow metal to an all-time high. According to forecasts provided by Australia and New Zealand Banking Group (ANZ), the price of an ounce may reach the $2,100 mark by the end of the year.

According to Daniel Hynes, senior commodity strategist at ANZ, the development of the precious metal market in the future will depend on a number of circumstances. However, he considers progressive inflation the main prerequisite for the rise in gold prices. The increase in the money supply and the fall in the dollar exchange rate make people rethink the risks in order to protect their savings. Because of this, the demand for the valuable metal will continue to grow.

Representatives of the American financial conglomerate Morgan Stanley are confident that inflation will continue to rise over the next two years. Lately the US Federal Reserve System*, aka the Fed, has not denied that in the current environment it would rather allow inflation to accelerate.

The reasons for such a stance were recently expressed by strategic investor Michael Gentile, a member of the board of directors of a number of mining enterprises.

“If the government takes the hard line and doesn’t inflate, doesn’t suppress rates, the United States is not going to be able to pay back their debts.”

He believes that only a deliberate weakening of the dollar by means of increasing inflation will allow the US government to avoid bankruptcy in the future, when the time comes to pay on loans. Otherwise, in a few years, considering a growing interest rate on deposits, the estimated amounts of payments to the country’s citizens may become onerous.

Consequently, gold will retain its leading positions, occupying a niche of a reliable defensive asset. 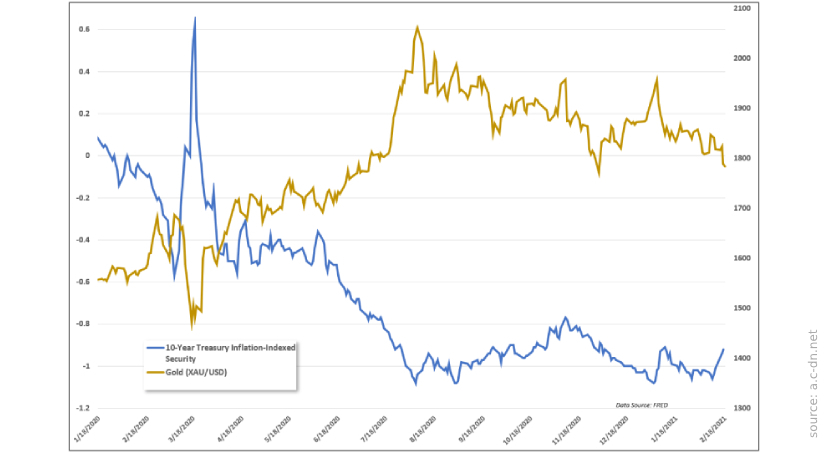 In the chart: as the events of the last year show, inflation fluctuations stimulate the growth of the yellow metal (in yellow), but negatively affect the value of US government bonds (in blue).

In addition to inflation, the dynamics of the gold rate may be favorably influenced by the subsequent recovery of world economies too. This is an obvious advantage for the gold mining sector.

According to the expert, economic factors, such as low interest rates along with additional tax cuts and increased government spending will keep gold prices high this year.

The price of an ounce of gold has every chance of setting a new record. The desire of the population to secure their assets coupled with the restoration of purchasing power will cause a new wave of demand for the yellow metal. Thus, its price will rise.

Do you want to secure your savings and avoid overpaying?

*The Federal Reserve System — aka the Fed, is the independent agency that oversees the commercial banking system and acts as the central bank of the United States.

*Producer price index — indicator of changes in prices for goods at the wholesale level of sales. Usually, its growth precedes an increase in inflation.