The National Bank of Poland announced plans to buy at least 100 tons of the yellow metal soon. The country plans to make gold one of the main assets in its government reserves.

According to the head of the Polish central bank, Adam Glapiński, replenishment of gold and foreign exchange reserves will be among the top government priorities for the next few years. He says that currently there are about 229 tons of gold in the vaults, most of which were purchased under his leadership. In the future, the bank plans to buy at least 100 tons that will also be stored in Poland.

Given the current price of gold, the country would have spent from five to six billion dollars on the purchase of the planned volume. According to the World Gold Council*, the current share of the precious metal in the reserves of the main Polish bank amounts to roughly 8.7%.

Over the past decade, many central banks have substantially increased their gold reserves. The most notable activity is observed in Eastern Europe, the Middle East and Asia. The main reasons for the increased demand for the valuable metal are: the desire of countries to strengthen their financial position using a stable asset, as well as the strive to minimize the detrimental effect of a weak US dollar on the global economy.

In 2018, Poland replenished its gold and foreign exchange reserves by purchasing 125 tons of the precious metal — for the first time in almost two decades. In 2019, representatives of the National Bank decided to repatriate 100 tons of Polish investment gold from the London vault of the Bank of England back to Warsaw.

According to Glapiński, this is a smart decision, since the chances of a change in interest rates in Poland are practically zero. 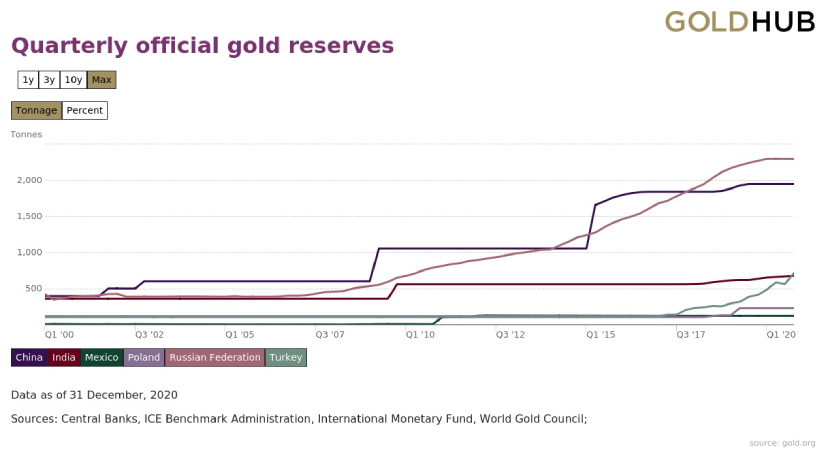 In the chart: dynamics of the increase in Poland’s gold reserves (in tons) from the first quarter of 2000 to the fourth quarter of 2020.

Jim Wyckoff, lead analyst at Kitco News, believes that the precious metal is still in a massive cycle of price increases and assumes that the gold rally will continue in the future. Breaking the $2,000 per ounce mark will be only the first precondition for setting new price records. According to the expert, global inflation will only rise in the coming months. This can lead to a new wave of demand for gold as a defensive asset among both various institutions and ordinary people, which will further stimulate the growth of prices of the yellow metal.

Since the gold rate tends to rise in the long term, now you can purchase the asset at the most favorable price. Participate in a special project of the GIG-OS online platform.

Fix the cost of 100-gram investment bars — this way you reduce the likelihood of subsequent gold market price increase affecting the amount of your order. Make payment in parts at a convenient time for you, choosing the amount of every new contribution independently.

Create your gold reserve without unnecessary burden on your personal budget!

*The World Gold Council — the market development organization, founded by the world’s leading gold producers to stimulate demand for gold.